During the warm summer months in Michigan, we start to see many wasp nests appear on the sides of houses, corners of fences, or in the branches of trees.

These large papery nests swarming with stinging insects are very intimidating, especially when they are so close to your home! Unfortunately, unlike bees, wasps can be very aggressive and can sting multiple times, therefore threatening those around their nests.

There are several types of wasps that create these types of nests in our area: 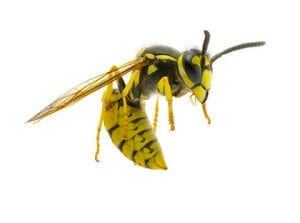 A typical aerial yellow jacket is about half an inch in length and typically has alternating bands of black and yellow across the abdomen. These yellow jackets build nests in trees, shrubs, or on protected man-made structures.

The nest is built from dead wood fiber chewed into a paper-like pulp.

The nest can either be “open”or “closed”: 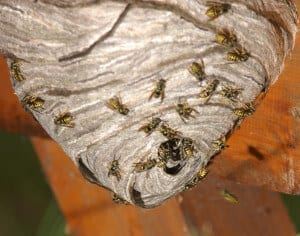 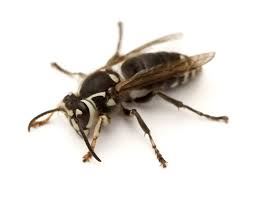 The name bald-faced hornet is actually a misnomer since they are not hornets, but are, in fact, also wasps. 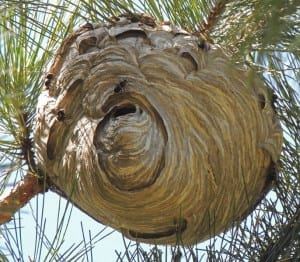 Bald-faced hornets are distinguished from other yellow jackets primarily by their black and white coloring rather than the usual black and yellow. They are also slightly larger than most wasp species at about .75 inches in length. 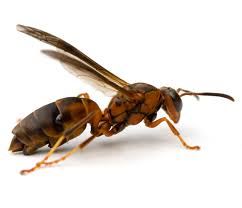 Paper wasps have a slender body, are typically .75 inches in length, and can be yellow, brown, red and/or black in color.

They are sometimes called Umbrella Wasps because the shape of their nests resemble and upside-down umbrella. The paper nest the wasps created is a single open comb.

They too derive the paper material for their nests from wood and plant sources mixed with their saliva. Their nests can be found in sheltered areas such as the eaves of a house, the branches of a tree, or even on the end of an open pipe. 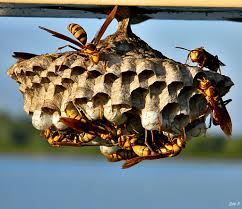 Unlike yellow jackets and hornets, paper wasps will generally only attack if threatened. However, a sting from a paper wasp can be very serious, especially for those with allergies or who have been stung before.

The best way to eliminate a colony of wasps around your home is by killing the colony and then removing the nest. If you simply remove the nest, the wasps will often rebuild in the same spot. Since these wasps are stinging insects, it is often recommended to seek out a pest control professional to handle a wasp infestation.

proof. covers wasps as part of our seasonal Pest Free Guarantee™ service plan. Click here to learn how it works, or call us anytime for a free quote!