Flies are fairly recognizable as far as pests go, but identifying exactly what kind of fly you are seeing around your home is a little tricky. If you can’t tell by appearance alone, you can often figure out the species of a fly by its source. Once you determine the species, you are more likely able to eliminate the hatch of flies. 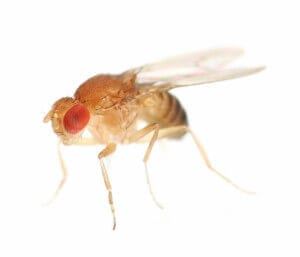 Appearance: Very small flies that are about 1/8 inch in length including the wings. They are among the smallest flies found in homes. A distinct characteristic of a Fruit Fly is its bright red eyes. The body is usually a light yellow to tan color.

Source: Homeowners typically encounter Fruit Flies in and around their kitchens and near garbage storage. Fruit Flies are generally found hovering over decaying fruit or fermenting materials, such as leftover beer or soft drinks.

Elimination: Fruit Flies are attracted to the smell of vinegar and usually once in vinegar, they cannot fly out. One way to attract and trap fruit flies is to get a bottle of apple cider vinegar, cover the top with plastic wrap, and poke a hole in the top for the fly to enter through. Putting a bit of dish soap in the vinegar also helps prevent the fly from flying. 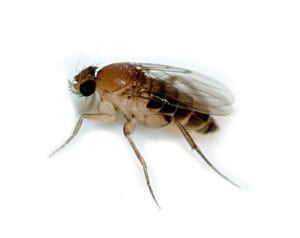 Appearance: Small flies that grow up to 1/8 inch in length. They are a little darker than Fruit Flies in color, tan to dark brown, and lack the bright red eyes. The most prominent feature of this fly is its humpback shape of the body. The Phorid Fly also has the distinctive feature of running rapidly across surfaces instead of flying immediately when disturbed.

Source: Typically found breeding in poorly stored meats, damaged containers of food, damp organic materials, and organic-based glues and paints. They are commonly found in kitchen areas, around plumbing, in garbage containers, and in crawl spaces and basements.

Elimination: Removing the source is always a good start when fighting Phorid Flies. Clean the drains in your home to remove any standing organic debris. Close food containers and garbages. Fix any leaks causing excess moisture in your home. 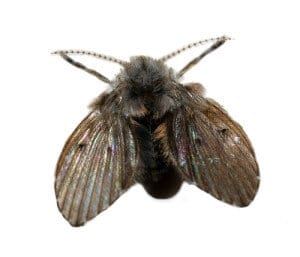 Appearance: Small black or brown flies, usually about 1/8 inch in length. The key identifying trait for this fly is the unique pattern of veins in the wings. If crushed, they flies leave a powdery smudge.

Source: Drain Flies breed in drains, sewers, septic tanks, and soil that has been contaminated with sewage.

Elimination: Using a sanitation product like Invade Bio Drain or even Drano will help destroy the Drain Flies breeding area if they are breeding in the drain. 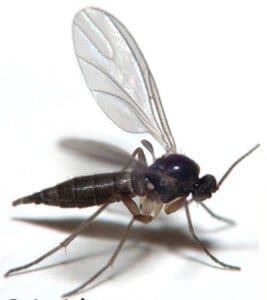 Source: Dark, moist areas are breeding grounds for fungus and, in turn, for Fungus Gnats. The larvae feed on fungus growing in soil and moist organic matter. Damage from these gnats most often occurs in greenhouses or in plant beds.

Elimination: To eradicate Fungus Gnats, you have to rid your home or yard of the fungus source. Don’t stop looking once you have found one breeding source; in most cases, several breeding sources will be present. Keep the source area lit and dry to prevent fungus from growing and spreading. 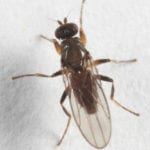 Appearance: Small black flies with a thicker section at the very top of the legs. Also called “dung flies” because they may breed in animal manure.\

Source: Often found breeding in animal manure and in poultry houses. Also may feed on organic decaying matter, meaning they may be found in the same areas as Phorid and Fruit Flies.

Elimination: Remove any decaying matter from the area. If found in a drain source, clean out the drain with a bio drain gel. 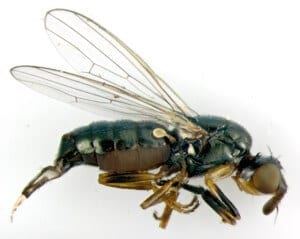 Appearance: Black and shiny flies with bronze tints about 3/16 inch in length. Reddish brown eyes and slightly iridescent wings. The Cheese Skipper has sudden snapping movements which may cause them to “skip” as far as 10 inches.

Source: Often found on cheese and meats. They can also get trapped in grease and food in cracks of equipment. When inspecting for Cheese Skippers, remember that the breeding source must be moist.

Elimination: Sanitation is important for the containment and eradication of this fly. All surfaces should be entirely cleaned to remove all grease, crumbs, cheese, and meat scraps. Fogging with pyrethrin compounds is also recommended for killing adult Cheese Skippers.

Getting Rid of Flies

Battling flies can be a pesky task that can take a lot of effort. There may be multiple sources and possibly multiple species that you are dealing with.

If you need help getting rid of flies, we cover flies and more than 30 other bugs, plus rodents like mice and voles, with our Pest Free Guarantee™ seasonal service plan.

Give us a call today and we’ll tell you all about it and give you a free quote!