So what’s all of this talk about the Zika Virus and mosquitoes? Maybe you aren’t too worried about it right now since it’s cold outside and there aren’t many mosquitoes currently flying around Michigan, but let me share some insights and reasons why you should take some precautions against this new threat.

What is the Zika virus?

Just recently there has been an alert issued as the number of people infected has been growing. The World Health Organization just predicted that over three million people in the Americas will be infected with Zika this year.

What are the symptoms of the Zika Virus? 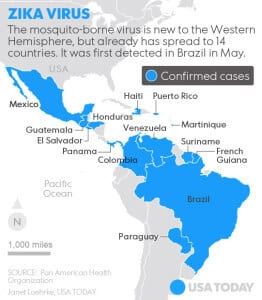 Some of the symptoms include, fever, red itchy eyes, rash, and joint pain. The symptoms only last a few days to a week, and very rarely do people ever get sick enough to be hospitalized or die. There is no vaccination for the virus so the best way to combat the disease is through plenty of fluids and sleep.

How is it Transferred?

The Zika Virus is transferred primarily through the bite of infected Aedes aegypti mosquitoes which are the same mosquitoes that carry other diseases like the West Nile virus.

These mosquitoes typically lay their eggs around places with standing water and prefer to live anywhere around people. The mosquitoes that are infected tend to be more aggressive biters during the daytime.

It is also possible to transfer the virus from mother to child during pregnancy but this is more rare. Recently, there have been reports of the virus being transferred sexually from males with infected sperm into females.

So far the areas with reported active mosquito-borne transmission of the Zika Virus are contained mostly to areas of central America including Brazil, Mexico and Puerto Rico. However, there have been cases of people in the United states contracting the virus through sexual transmission.

A pregnant woman that is infected with Zika runs the risk of their baby being born with a birth defect called Microcephaly. This birth defect stunts the growth of the brain during the pregnancy which makes the baby’s head much smaller than normal. These babies often suffer from hearing loss, vision problems, seizures, slow development, etc.

According to several sources, the best way to avoid getting the virus is first to avoid traveling to any area where there is reported active mosquito-born Zika Virus. This is especially true for women who are pregnant or may become pregnant no matter what trimester they are in.

With the rapid spread of the disease, we would also recommend a preventative mosquito treatment in order to have a strong barrier from mosquitoes around your house. We Michiganders know how bad mosquitoes can be during the summer time. Not only are they a nuisance, but can be dangerous for you and your family.

We offer a range of Mosquito Control services, from 1-time treatments to complete summer-long protection. Call us today for a free, custom quote for mosquito control for your home!