Martha’s Vineyard prides itself on being an excellent summer destination – a home away from home, mostly because of its mild summers and beautiful beaches. Thousands of tourists flock to the island during the summer months, plus many residents only reside there during that same three month stretch. 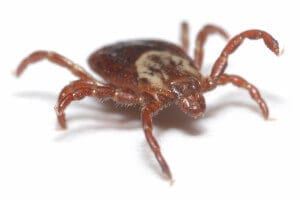 However, along with catching some summer rays or oceanic fish, there’s also a good chance of catching Lyme Disease. Lyme Disease, a bacterial infection causing flu-­like symptoms, is transmitted through black-legged ticks.

These ticks are commonly found in moist, wooded or grassy areas, much like the landscape of Martha’s Vineyard. Of the 25,000 cases each year, 15% occur in Massachusetts, the second highest in the nation, second only to Pennsylvania who has 26%.

Martha’s Vineyard is a hot spot because of the population of deer. Local deer have been known to have over 300 ticks feeding on them at one time. The transmission cycle starts with an adult tick, who only feeds off of deer and lays over 2,000 eggs while feeding.

The larvae, who then feed on infected white- footed mice, grow to become infected nymphs and adult ticks. Lyme Disease is not transferred to a human if the tick is removed within 36­-48 hours. Since most adult ticks are removed before that time, often the disease is transmitted through nymph bites.

This statewide epidemic has recently received attention from leading scientists and doctors.

A groundbreaking tactic by Dr. Kevin Esvelt, an associate Professor at MIT, introduces the idea that if the white-footed mice did not have Lyme Disease, the transmission cycle would stop.

He is suggesting research to create and study a vaccine for the mice that would alter their genetic makeup, introducing them into the wild where each of their offspring would be disease free as well.

Sam Telford, a tick researcher and professor at Tufts University agrees that this in conjunction with controlling the deer population is key to eliminating Lyme disease. The island of Martha’s Vineyard is the perfect location to use as a controlled environment.

Use of biological pest control is often the best way to control outbreaks like this, but unfortunately it takes time to create and implement. Even if this preventative strategy is successful, it is still a decade away from being used.

Using nature to fight against itself has seen success in regards to many pests, but it is often not the first choice by pest control companies. Chemical pest control is the easiest route so it’s the one many large companies use.

We are different at proof. Pest Control. We use the integrated pest management (IPM) philosophy where we combine techniques based on how they affect humans, the environment and the targeted pest(s). The goal is always to remove the pest, but how one does it can make all the difference.